Ok, so it’s really a little more than a week but who’s counting?

On Thursday – the DirecTV DVR started dying a slow death. So I called and pushed numbers and listened to annoying music along with annoying ads. After getting to a service person, ran the tests and did a reset. Same problem again on Friday. Called again, listened to more music and ads and this time they decided to send me a new receiver.

This past Saturday – first DexCom issue. Initializing. Called DexCom and the rep said they’d send a new receiver on Monday.

DirecTV receiver showed up today. Got it all plugged in and called DTV to activate. Hmmm, very little annoying music and ads. Receiver is hooked up and receiving.

DexCom left a message asking me to call to discuss my issue with the receiver. Called back, lots of annoying music… and finally was given the option to leave a voicemail as there were seven (hee, hee DexCom 7…) calls before mine. That was 2 hours ago and no one has called. Somehow, I don’t think anyone is going to work late just to return my call. They’ll wait until I’m at work tomorrow, I’m sure.

Even after just one week, I really, really like having a CGMS.

This is my “OMG, I could do a commercial” photo! 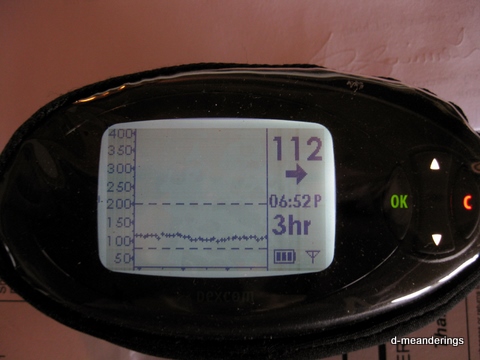